Wow, it's been five and half years since that last post. My life has taken so many dramatic twists and turns. All the cats and rabbits have passed away, except for Buster, my last post.  Buster lives next door with Duane now. Bright Eyes passed away this year just before Thanksgiving.  I always thought when Bright Eyes died that I would go too.  Instead it was Bootsy two weeks later.  Tennessee passed just before Mother's Day.

The one thing that stayed the same, I'm still working at that call center.  I thought the call center job had sucked all my creativity, but I think it was when Butterscotch passed. Now, I'm feeling like that woman on Julie and Julia. My job is sucking the life out of me and I need to get back to a creative outlet.  This blog pulled me out of my funk before.

My granddaughter Faith lived me for a few years and now she's back in New York with her mom. She is how I ended up in this two bedroom half a duplex. Duane lives in the two bedroom single unit next door with his four cats.

So now, its me with 9 cats and my dog Charlie. He thinks he's a cat. 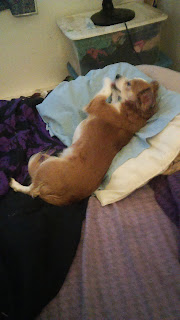 Then there's Lars. I knit him hats and socks.  Ankle sock with double knit heels as he blows through heels and I have pile that need repairs. He's also the crazy catman. 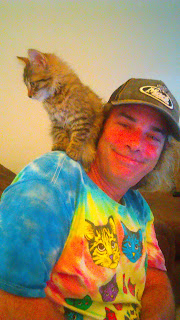 I considered starting a new blog, but Covered In Cat Hair was taken. Not wanting to step on someone else's turf and a quick Google search, I decided, I'm still Knitting Kitties. The characters aka cats might have changed but I'm still me. So hang on from the whiplash, I hope you enjoy the whacky adventures of my new life.

This is a Flickr badge showing public photos from knittingkitties5. Make your own badge here.